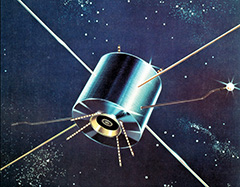 Development of solar cells for space was started, and production began in 1970. In 1972 the National Space Development Agency of Japan (NASDA), *1 gave authorization to Sharp, and in 1976 the working satellite "Ume" was launched with Sharp's solar cells on board. Space is a very harsh environment different from that of the Earth, with severe temperature changes and cosmic radiation. Even in such an environment Sharp has proved its reliability.